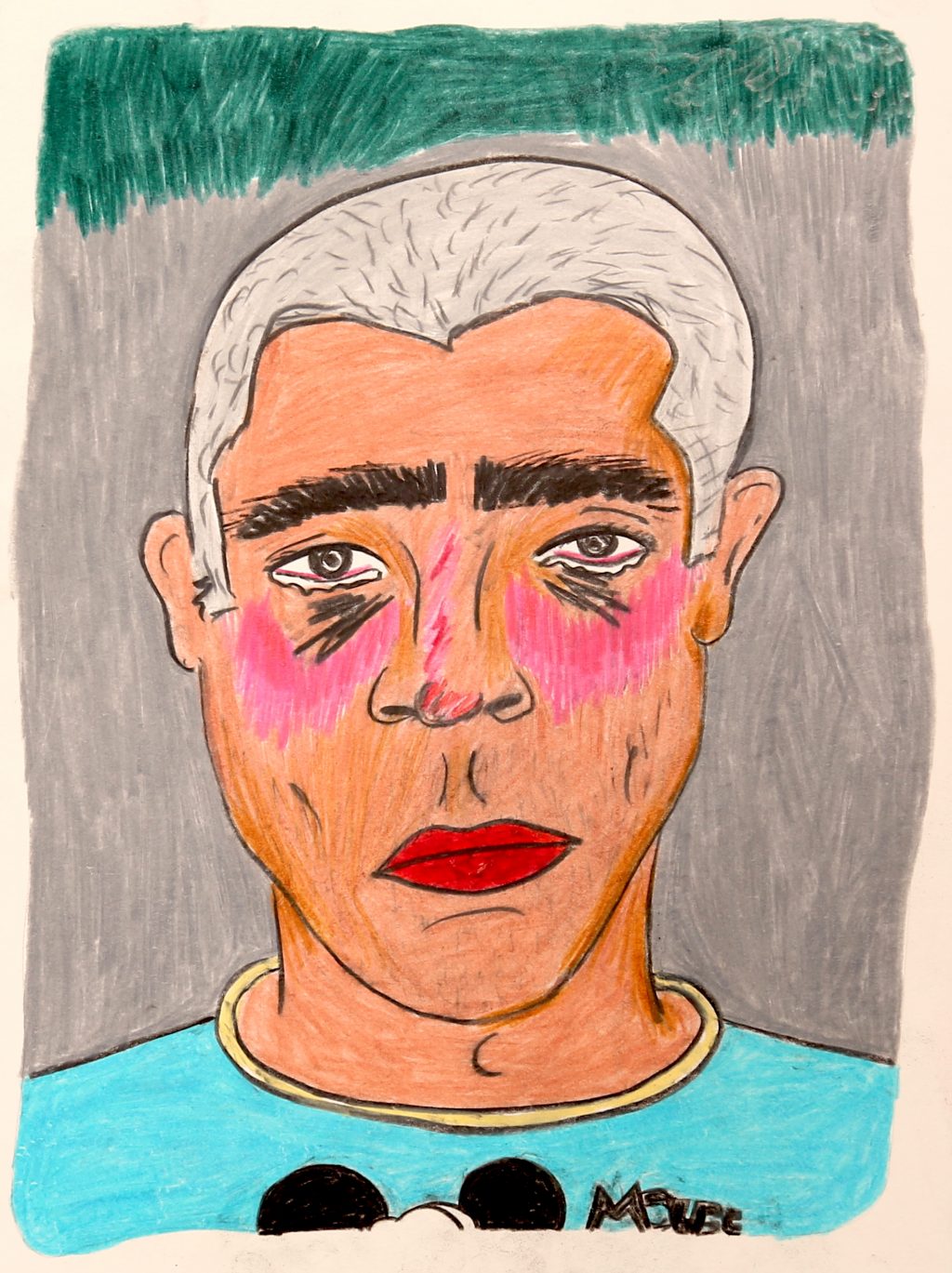 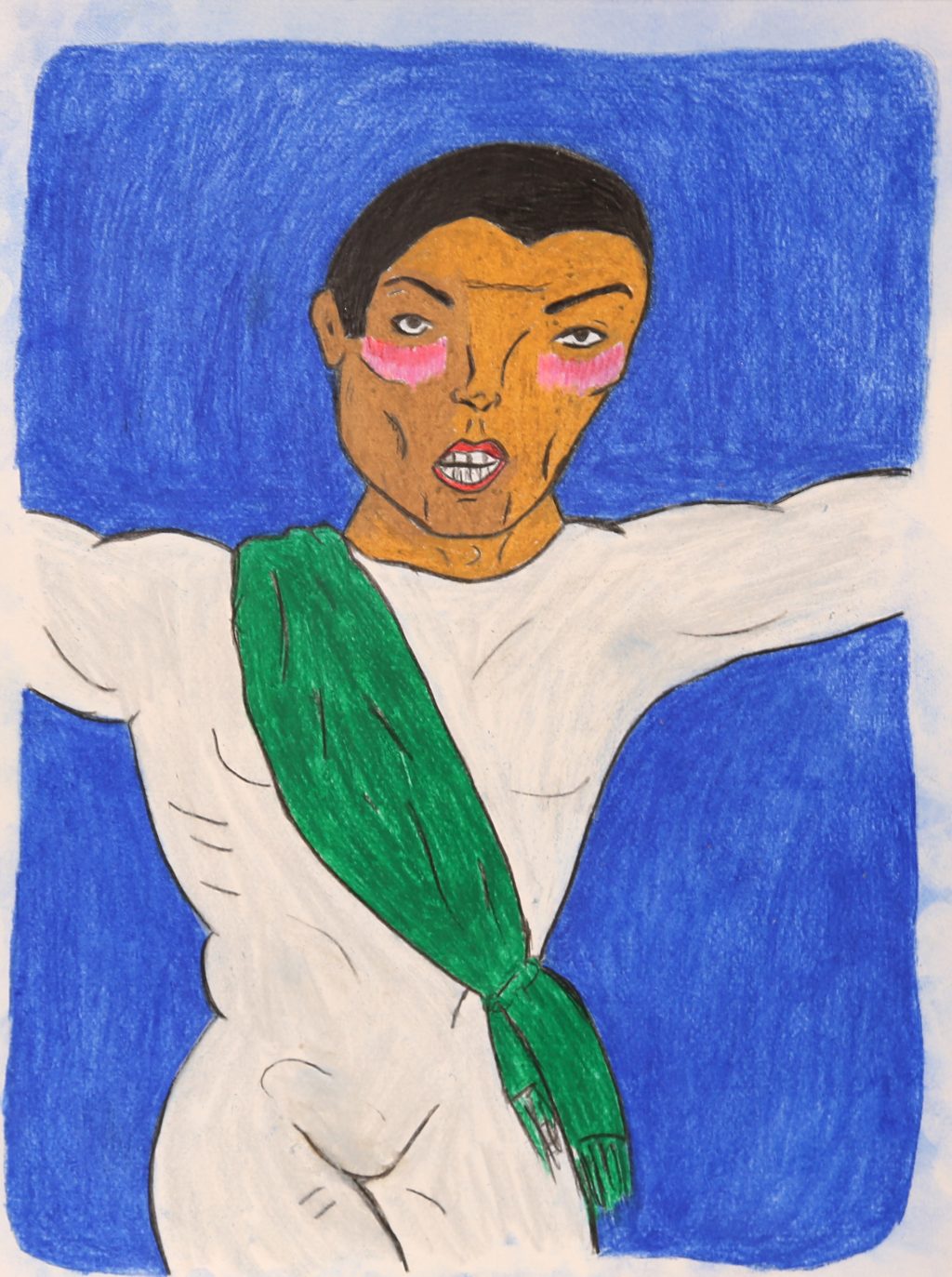 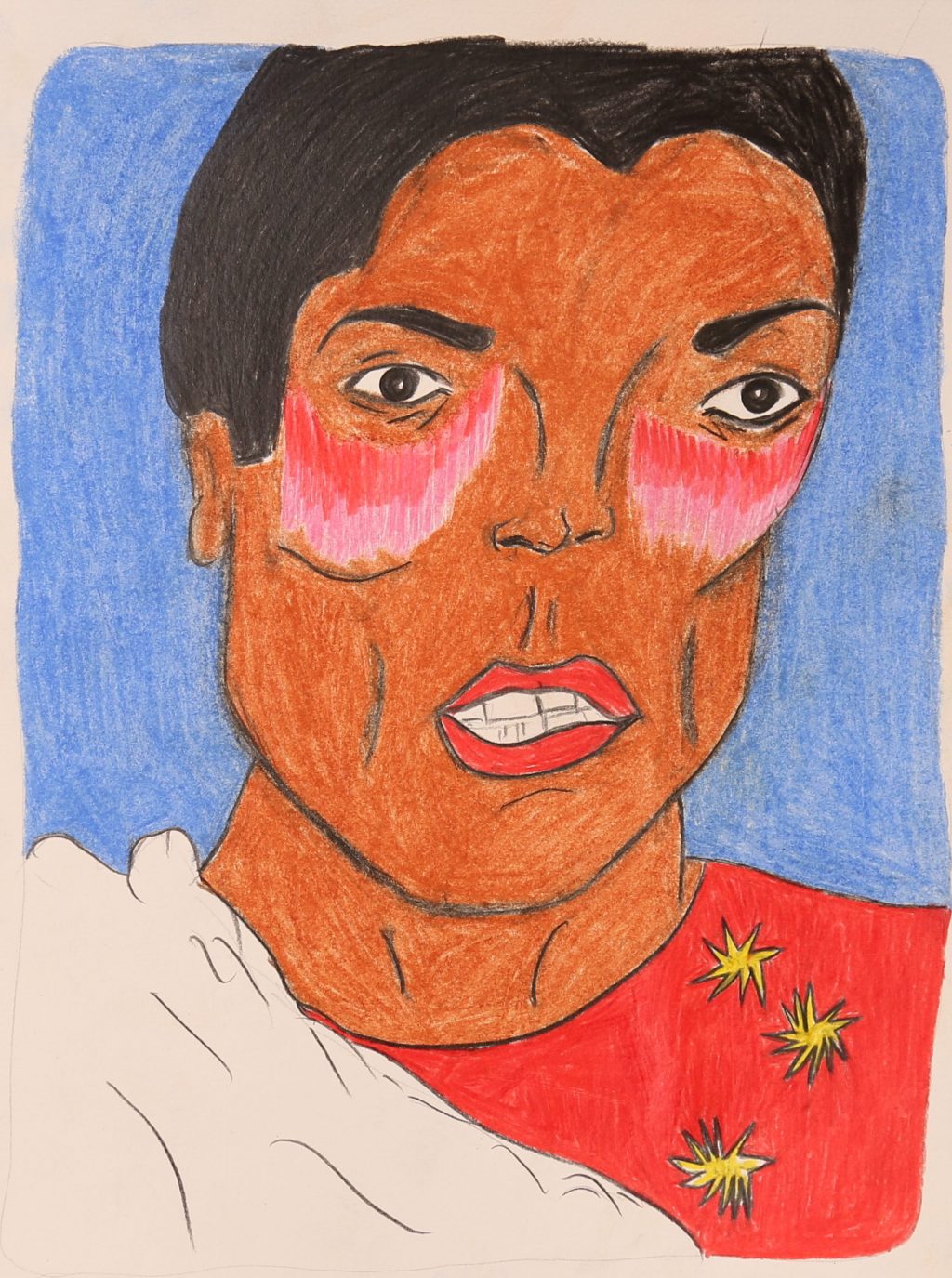 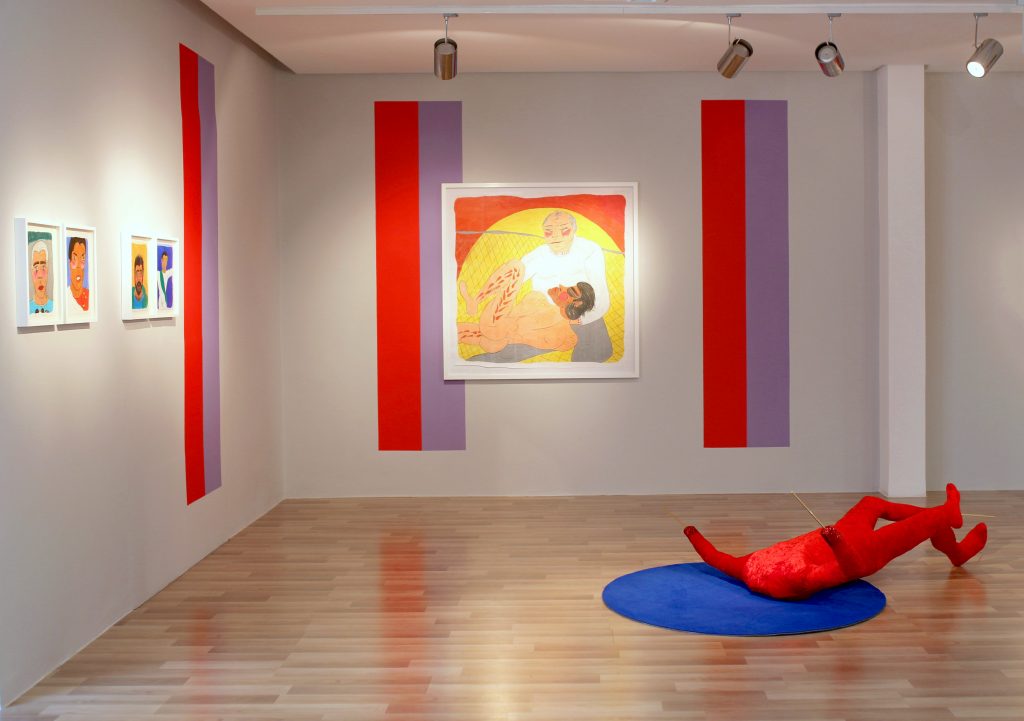 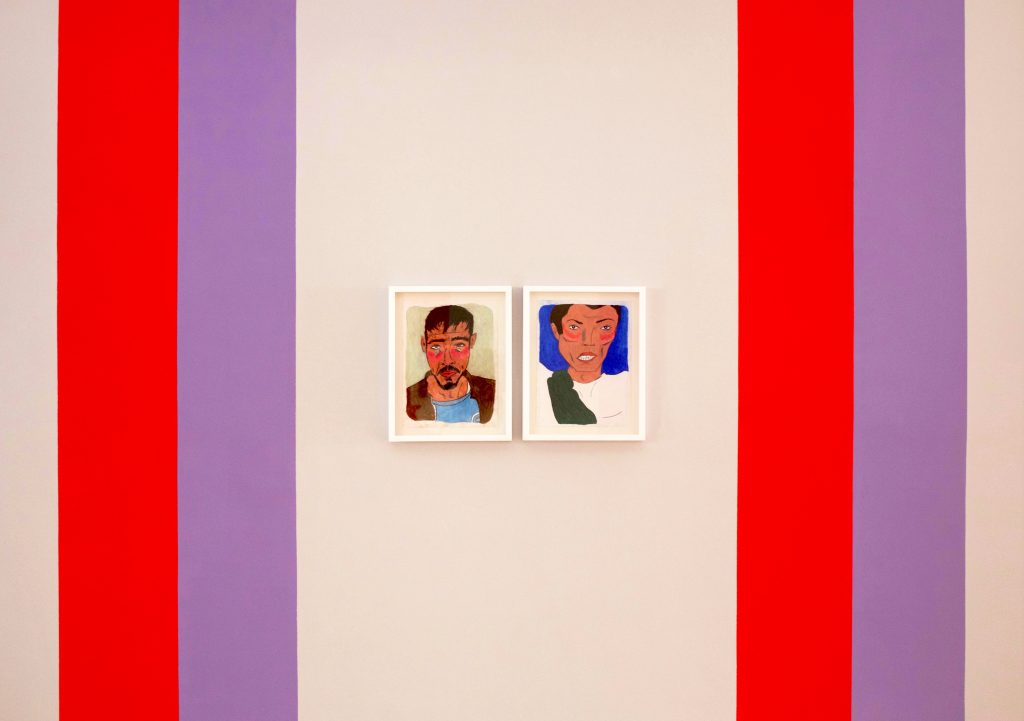 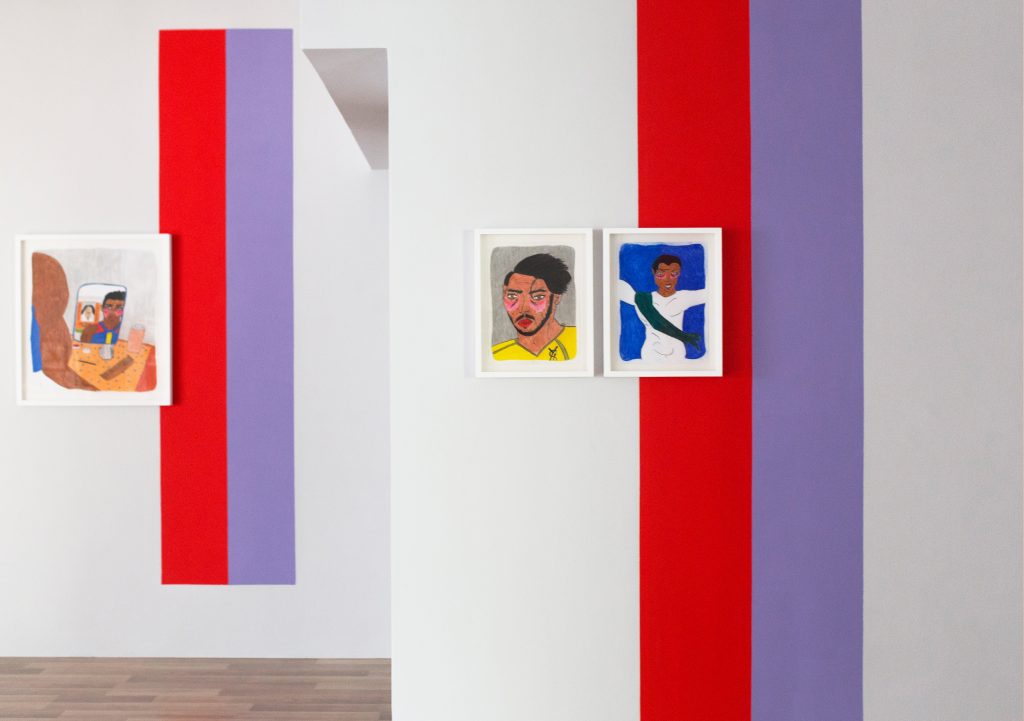 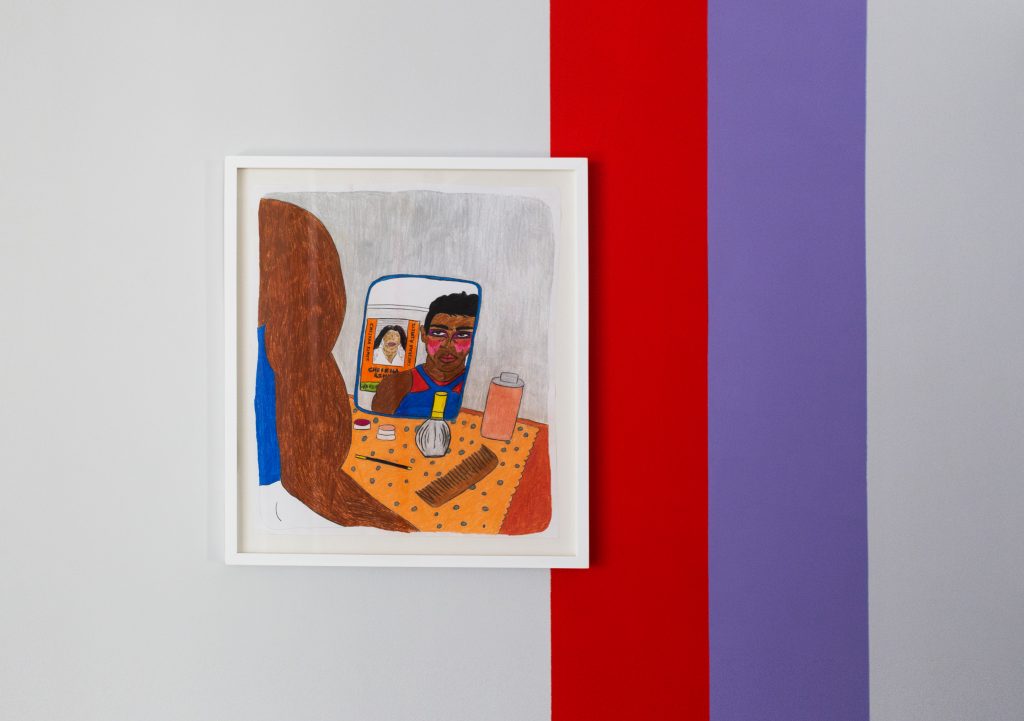 “A Circus Act Behind Bars of Lilac and Blood”

Since the late 1940s, when his written work first gained notoriety, Jean Genet has mattered to many people, for many different reasons. For some of us, it was certain pages, picked out after flipping past many others, that captured our attention: words on the page about sexualized males—men and teens, always outlaws, the marginalized and rebellious—as the objects of a desiring male gaze and, sometimes, described in intense physical contact with their admirer. These pages excited my young mind and body, either late at night or with the shades and doors closed tight, quite often in bed. In this iteration of his Bedworks—the faux naïve intensely coloured drawings that the Moroccan artist creates while lying in bed— Soufiane Ababri summons that agitation. Yet he also draws on and intervenes in some of the thickest historical contexts and most important political discussions in which Genet mattered so much. Two, in particular, which also shape some striking aspects of Ababri’s work: the post 1940s antecedents of today’s queer and gay movements, on the one hand, to the anti-colonial movements—more specifically, what many leftists in the 1970s celebrated as the “Arab revolution”—on the other, from the Algerian Revolution that triumphed over French imperialism in 1962 to the Palestinian revolt that continues to upend efforts of the powerful to silence those who struggle and ignore those who support them. In his “A Circus Act Behind Bars of Lilac and Blood,” Ababri does this by placing Abdallah Bentaga at the center, in contrast with most accounts, where the young Algerian highwire artist, who was seriously injured in a fall from a high wire in 1959 and committed suicide in 1964, is reduced to the inspiration for Le Funambule (1957)—the text that Genet wrote for Abdallah, with whom he had fallen in love in 1956. […] Ababri’s drawings rehearse and play with erotic stereotypes and fantasies, most spectacularly around the “hyper virile.” Yet everything he does injects interiority and multiplicity into them, urging viewers to see and attend to the individual subjects who people each collective “them,” Genet’s “Algerian lovers,” to take a pressing example. The young Abdallah most incisively in this exhibit, as when Ababri reveals the high-sire artist is looking in the mirror at Abdallah, a man gazing at himself. We see the “natural” beauty and muscles that “heroic” homoerotic depictions adore, interpreted as signals of the “natural,” pulsing male desire homo-orientalists suppose to be unsullied by muddy homosexual depths. Around the mirror, however, Ababri draws in the make-up, the comb, the perfumes or unguents, which recall instead how Abdallah worked to produce such adoration in Genet and other (old, white) men (and women). Behind the mirror, Ababri places a Cheikha Rimiti poster—the raï artist, the Algerian woman, whose performance of femininity, and voice, challenged so many norms—that speaks to much more. The body cast that represents Abdallah, fallen or thrown by his own will to the ground, with its sculpted musculature and sexy crotch, screams out that Abdallah was one person, even as he played his role as a figure of fantasy. A fantasy for Jean Genet, and many others, too.

Let us not reduce Ababri’s work to the historical or the sociological. The artist draws on a rich palette of references—the “lilac” of the title, like his colours, evoke the super-gay Andy Warhol’s “Flowers” (1964) or the radical pre-queer filmmaker Jack Smith and his penile lilies—to insistently inject queer, gay, and homosexual signs and accents into the “universal” frames—of the outlaw, the abject, and the sodomitical, among others—that Genet worked with so effectively to speak about masculinity and power. Ababri’s camp and queer resonate with Morocco and (individual) Moroccans, the Maghreb and (individual) Maghrebis, men whom Genet celebrated for their revolt. Celebrated as Genet he would later do with Palestinian fedayeen and US Black Panthers, and in so doing, also reduced them into simple opponents to the world as it was. They were much more. Ababri’s art rehears and yet upends, that is, the orientalist, exoticizing, heroic, and sexy male registry of images on which he draws. The queer-of-colour critic José Esteban Muñoz, writing about Jack Smith, claimed that the filmmaker took Orientalizing stereotypes and “inflected [them] with disidentificatory difference that helped toxic images expand and become much more than quaint racisms.”1 Ababri does more, as he sits in bed and resituates his men in a world where Cheikha Rimetti lived and sang and where the interior spaces, associated with women, that Ababri’s Orientalist blue evokes for us reminds viewers of the constantly shifting positions—sexual, gendered—that power works through, yet that still artists imagine differently. With the help of Ababri, perhaps others can, too.